We have a good sense of how women are faring in the public and private sectors as most of the literature dealing with women in the labour force focuses on women’s employment experiences in these two sectors. However, when it comes to women working in the nonprofit sector we have little to no information. Data on the sector as a whole is sparsely collected on a consistent basis, women’s employment experience in the sector is an underexplored area of research, and the sector is either forgotten or subsumed under the public sector (at times then referred to as the broader public sector). But unique distinctions that impact employment trends exist between the nonprofit and private and public sectors (e.g., higher unionization rates which result in higher pay).

Piecing together quantitative and qualitative information from a variety of sources in Ontario and Canada, our recent literature review reveals that women’s compensation in the sector is affected by three critical issues: the “care penalty”, a gender wage gap, and limited access to benefits such as a pension plan and maternity top-ups. While only two are about pay and one is benefits related, together these issues create a compensation picture where women earn less than men in the sector. The “care penalty’ impacts women’s earnings in carework positions from the outset and a lack of benefits sets women back economically during critical points in their life cycle. A gender pay gap exists across the sector for women as a group. You can read more in depth about this finding in Decent Work for Women: A literature review of women working in the nonprofit sector.

This is the second in a series of three blog posts (each focusing on one of these issues) that highlight the findings of our literature review.

A gender wage gap exists in the sector

Employment income also varies by subsector. Zizys cites that the range is from a low of $20 108 for women working in child day care services in Ontario outside the Toronto CMA, to a high of $74 988 for males working in out-patient care centres in the Toronto CMA. He found that the highest paying sectors in both Toronto CMA and the rest of Ontario were: Out-patient care centres, grant-making and giving services, and social advocacy organizations. Kate McInturff and Brittany Lambert in their report Making Women Count note that women employed in women’s organizations are the lowest paid amongst the nonprofit sector (McInturff & Lambert).

Zizys found that men in senior manager occupation earned 43% more than women while men in the second highest occupation of managers in social, community and correctional services level earned 20% more, despite the educational attainment of women in the occupation being exactly the same or higher than men’s. The 2017 Charity Village report Salary and Benefits Study found that the gap between earnings at the Chief Executive level between men and women is the largest of all the levels at 24%: men earn $109 302 annually whereas women earn $88 204 annually. The next largest gap is at the Management/Supervisory staff level at 12% while for the other levels, the difference ranges between 4% to 7%. Moreover, average compensation for all four management levels has risen since 2013 while compensation among lower staff positions, in which women are disproportionately concentrated in, has held steady.

So, what does this mean?

While we need to do more research to uncover how different causes of the gender wage gap are operating in the sector, one that the review revealed was occupation and industry segregation within the sector. Women are underrepresented in senior leadership positions that usually have higher earnings and overrepresented in lower level positions that usually have lower earnings in comparison to their employment share in the sector which sits at 80%. Even when in leadership positions, women are more likely to lead smaller organizations that don’t have high salaries. Women are also concentrated in lower-paying subsectors such as childcare.

In the Charity Village report, the explanation provided for why the gap in earnings is the most prominent at the senior leadership level between men and women is that men are more likely to be working in organizations with higher revenues and more employees whereas in lower level positions both men and women are equally likely to be employed by organizations with lower revenues and employee size and thus have comparable earnings. However, the Charity Village report does not disaggregate data at each level by gender combined with race and other factors that impact compensation such as age, years of experience, and education as well as budget of organizations. The Boland report disaggregates data by years of service and gender. At 3 out of 4 categories women had similar or more years of service under their belt than their male counterparts. However, data was not disaggregated by education, organization size, and gender combined with race. This disaggregated data would provide a clearer picture of how much of the earnings gap is gender based and how much is based on other factors — and perhaps even how other factors are gendered (after all women in leadership positions are concentrated in small organizations).

Moreover, the increasing wage at senior levels suggests a significant impact on gender equality because women are predominantly concentrated in the lower staff positions while men’s share of employment in the sector is the highest at the senior levels.

The gender wage gap is one of three issues highlighted by our literature review. Stay tuned for our posts on the “care penalty” and women’s access to benefits in the nonprofit sector.
While the literature review was able to paint an introductory picture of women’s employment experiences in the sector, particularly that of compensation, we identified major gaps in research. One critical one is the lack of information available on immigrant, Indigenous, trans, and racialized women and women with disabilities. The available data on women’s compensation in the sector are not disaggregated by any identity marker other than gender.

Multiple intersecting questions have emerged from our literature review that require further investigation:

The literature review is only the beginning of ONN’s Decent Work for Women Working in Ontario’s Nonprofit Sector project. ONN hopes to explore these questions in the engagement phase of the project by hearing from women working in the sector through learning circles, key informant interviews, and a sector-wide survey.

The nonprofit sector in Ontario and Canada is rich and vibrant. Its contributions are critical to the social, economic, and political fabric of communities. Given the sector’s contributions and that it is a women-majority sector, it’s time that those working in the sector collectively begin to think about how it can lead the way for gender equity in the workplace.

How governance culture is shaping your decision-making 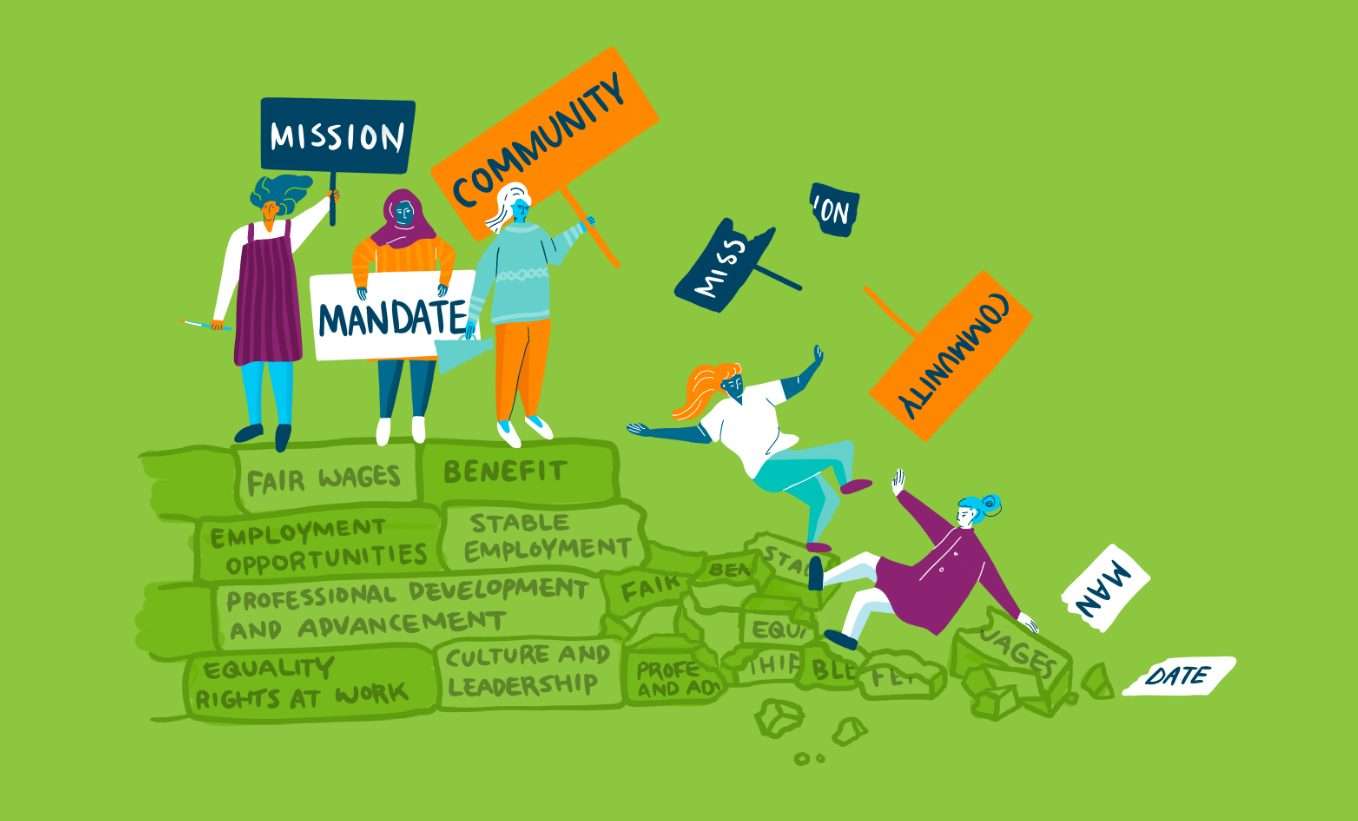 Reflections on the state of Decent Work for Women in the nonprofit se...