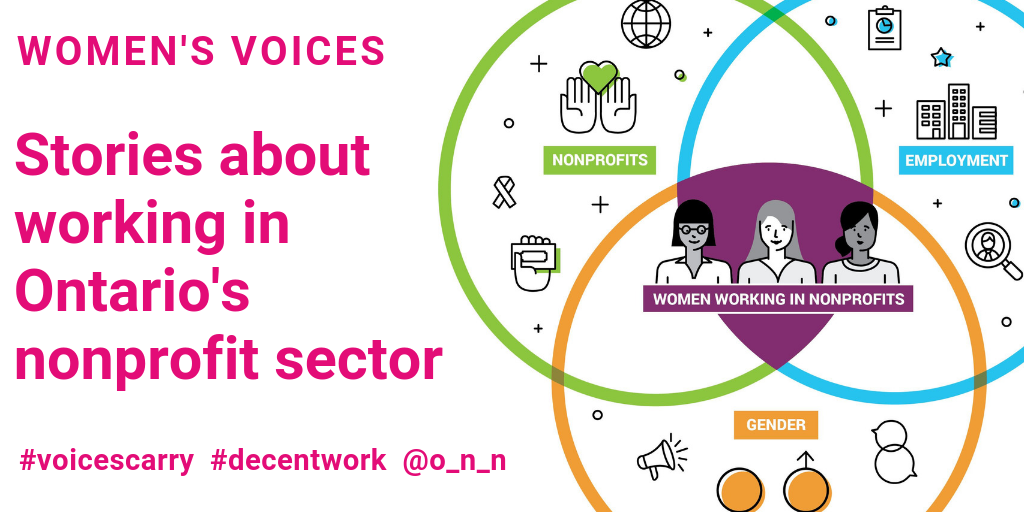 Now it’s your turn. Add your voice on what it’s like as a woman to work in nonprofits and carry the decent work movement forward.

Privacy and confidentiality is important to us and so no identifying information will be shared unless otherwise indicated by the submitter in the form below.

“In my experience working at non-profits, I find that there is a much higher ratio of female identifying employees. I used to view this as a positive, but over the years, I’ve started to think about how it’s a continuation to exploit women for emotional labour and underpaying. In my current role, the CEO’s nephew was promoted over me despite having several years less experience in our fields. Not only do I constantly have to help him understand some basic principles, but I have to do so knowing he makes 30K more a year than me – an entire entry-level salary. Talking with other coworkers I’ve learned the pattern that men in similar positions to women are generally paid more. So now when I see new women hired I question “did they hire them on qualifications? through a gender equity lens? or did they hire them because they thought hiring a woman could cost them less?”. The fact that this is the norm not only at my work place, but several of my friends’ non-profit companies almost makes me want to leave the industry.”

“As the CEO of an organization supporting people with a developmental disability, I find it has not become easier for me to expect or negotiate for proper pay or benefits. I have spent my career developing my skills, investing in education, and being grounded in the values of respect and integrity. You would think my career success would equate to some growth in my confidence when it comes to my worth, as an employee. I will always negotiate strongly for others but still feel less than when representing myself. I question my value and am constantly driven to excel. I am not clear whether this drive is internally driven or whether it is a result of a fear of being considered lesser than. I don’t see this ‘fear’ in my male colleagues”

“I was constantly being criticized by my male boss because of how cheap my clothes were or how wearing a t-shirt to work was unprofessional. When a male wears a t -shirt and jeans, they were professional, I was not. Being way underpaid, how could I afford to wear expensive clothing. I was over worked and was told by my male boss that it must seem like he uses his male privilege over me. Since then I am unemployed and taking a much deserved break from burnout in the sector”

“I think we need talk about the way women treat women in the nonprofit sector. In particular, older women seem to fear younger women, or more specifically, what they can bring to the table. Women need to embrace the opportunity to learn from and empower one another. 8 years in the sector, and I was never mistreated by a male colleague. Female colleagues in senior positions, is whole different story. When all I ever wanted was mentorship; instead I got micro-managers who used my ideas as their own, took every opportunity to consistently criticize my work, and who created barrier after barrier to ensure I could not progress in my professional development journey. I am not alone and this is a huge problem in this sector”

“I love my job, but no benefits, low wages, and the other job I have to work in order to make ends meet has me constantly sick and exhausted. I’d love to stay for the long-haul, but these conditions mean that we run our organization on a revolving door of interns and have an almost complete yearly staff turnover… we could be so much more effective with an employment structure that encouraged long-term commitment to the role! It’s also really hard to plan for a family around it, as my position is contract and I want the security of a permanent position before getting pregnant.”

“My experience is that too many of our communities are failing to build leaders who recognize the value of women organizers, activists, and workers. There is a general failure to support and even properly recognize women’s work, and too many men who are satisfied in taking all the credit and doing little of the work and sharing little of the power in making key decisions. When women are included, they are tokenized, and if they attempt to change the status quo, they are frozen out and isolated. Sexism sadly permeates much of our work, making it impossible for women to advance in non-profit organizations, nor defend their human rights”

Digging in with ONN is a Decent Work podcast series.
Access all episodes