As nonprofits face the challenges of operating during the COVID-19 pandemic, ONN has sought out leaders in the sector to share their insights and experiences to help foster decent work and recovery. In this post, Randall Terada and Teshini Harrison spoke with Paul Taylor, Executive Director of FoodShare, a Toronto-based nonprofit committed to food security and food justice. For him, advocacy and service work are inseparable, and any recovery for the sector must incorporate Decent Work and anti-racist practices.

ONN: You spent your formative years of your early career working in Toronto homeless youth shelter. And then you worked in the downtown Eastside in Vancouver. How did these early work experiences frame your current social justice outlook?

Paul Taylor: I found that we weren’t actually getting to the root cause of the issues that were causing youth homelessness. We were a place where youth could lay their heads. So I think I spent five years alongside my colleagues trying to get a better sense of what the barriers that street-involved youth interact with and how they could help and lead the creation of interventions that are actually much more impactful in terms of preventing homelessness in the first place. So we did things like build a school on site, introduced an assistant cooks program, introduced a catering initiative. It made me realize that in our society, we have this idea that if you’re accessing charity or if you’re accessing any type of subsidized services that you actually deserve less. So we flipped that on its head and said folks who are in really precarious positions actually deserve the most of our care and as many resources as we can provide to support them.

ONN: How would you connect this work with what you’re doing with FoodShare, particularly during the pandemic?

PT: I remember that day when it really hit me and I was pretty much moved to tears because at the start of this pandemic, everyone was being told to stay home. We had schools closed, we had workplaces closed but yet there are some people in our society who we have pushed to the frontlines of the economy. And these are folks who had to say goodbye to their children and head off to work when their children knew that it was unsafe. So I was so curious to see who is being forced to work during this time and yes, Black and Brown folks, predominantly women.

We decided that we were going to launch an emergency Good Food Box initiative. So instead of asking people to come and line up … we said, let’s get food to people. Let’s use our vehicles. Let’s leverage our capacity. We can fundraise a little bit and then let’s do what we can to actually deliver a box of beautiful, fresh produce to someone’s home during the time during their time of need.

We partnered with 80 groups across the city, working with Black, Indigenous, or racialized folks, newcomers, migrant workers, and prioritizing those groups in terms of access to this fresh produce. And I think that type of prioritization is something that doesn’t happen in our sector as much because we’re unwilling to talk about race. I think in recognizing the impact of anti-Black racism, anti-Indigeneity, we said, we’ve got to prioritize these groups and to forge those relationships.

ONN: And part of this involved responding to current events, too?

PT: Foodora [the food delivery service] decided that they were going to leave Canada. All of a sudden this company that’s posting massive profits, decides to close and leave workers across the country, some of the lowest paid workers in the food system, unemployed. We quickly reached out to provide three Good Food boxes to each of those 500 couriers across the city, whenever they wanted it.

But then there was the death of Regis Korchinski-Paquet, and I remember going to the Justice for Regis March, and Not Another Black Life, who organized the protest, [said] that anybody that came should really consider self-isolating for two weeks. So we said if anyone who went to that protest needs to self-isolate, we’re going to provide a Good Food box each week for those two weeks: a large Good Food box.

To me, it’s not about charity, it’s about fuelling the revolution that we need.

ONN: Last year, FoodShare was involved in a ground-breaking research project, and the findings were startling. The Research found that Households facing food insecurity were divided along racial lines: Black households were 3.5 times more likely to be food insecure than white households, 12 per cent of white children are food insecure compared to 36 per cent for black children. How do you reconcile these simple facts with ongoing debates over the presence of anti-Black racism in Canada?

PT: The reality is we live in a society that has been built on colonialism and white supremacy … So for example, when we have white business owners, when we have white male CEOs saying we can’t increase minimum wage because prices are going to go up, we don’t question them. It gets reported out on just the way that they say it. When Black folks talk about anti-Black racism, we have to justify, we have to explain, we have to describe.

I wish we didn’t need to have to produce this sort of research to justify what many of us already know. But there are many times when, as a result of white supremacy, we have to beat white leadership, white politicians, over their heads to pay attention to an issue that is a flagrant violation of things like the right to food.

ONN: You have spoken out about the shortcomings of the charity model when it comes to solving food insecurity. Would you say this extends to the whole nonprofit sector, in that we need to develop a framework to better address systemic inequality?

PT: Absolutely. We are doing the best we can with the resources that we have in our communities to respond to these crises. But really these things are connected to policy … The first food bank in Canada opened in 1981 and marked a period of creating these issues as issues for charity and allowing government officials to show up, sort some tins out for a photo op. I want these government officials to put those tins down and sort the policy.

ONN: Our Decent Work initiative at ONN, seeks to promote a number of important workforce practices that you have implemented under your leadership at FoodShare. Could you comment further on some of these practices and the process of putting them in place and some of the challenges and what are the outcomes?

PT: While we’re talking about challenging income inequality in society, we’ve got to do it within our walls as well. So the highest paid worker at FoodShare can make no more than 3.7 times what the lowest paid worker at FoodShare is paid. And when we did our pay grid review, we said, first of all, we’re going to make it a transparent pay grid, which it had not been. And then we’re also going to apply a poverty reduction lens and recognize systemic racism. And we’re going to say the folks at the bottom, we’re going to give a 25 per cent increase to the lowest paid workers. And then everyone else got a little bit, a little bit of an increase except for the senior leadership team that saw no increase. We also have an emergency loan program where our colleagues can discreetly apply for up to $2,000. We have never denied one yet.

I think things like that in terms of process have been relatively easy, because you hire the right folks, you have the right conversations, you cultivate the right culture in the organization. Our board is predominantly racialized, folks that get equity issues that understand food justice. We have an advisory committee that we take things to made up of 60 or so folks, we bring everyone together, we host a big meal, we hash things out, and we prioritize folks who are Black, Indigenous, low-income, to provide feedback to us on the work that we’re doing or the direction that we’re taking.

When we post jobs, it’s about working to dismantle white supremacy in our organization. If we’re building relationships with groups across the city that are working with folks in equity, from equity seeking groups, well then we call those folks up and say, “Hey, we’ve got a job posting, let us know if you have a candidate, give us a call.”

We’ve done things like anonymized resumes and we have deemphasized paid accreditation. Actually, I think many of us in leadership in nonprofit organizations and in business need to give ourselves a little bit of a shake, because I think so much of the way that we think has been foisted upon us by institutions that are based on colonialism and white supremacy. It’s really important to slow down and try and take a decolonial anti-racist approach to this work and how we build together. And if we’re applying that lens, FoodShare can’t build the impact of our work on the backs of low wage workers, that’s wrong. That’s why we’re doing what we can to increase folks with pay at the bottom of the pay grade.

And I feel like we too have a huge role to play in creating decent work. And too many of us say, well, we can’t provide benefits or we can’t pay someone a lot because a funder won’t give us a lot. We should be saying to that funder, “Hey, you are not creating Decent Work! You’re committed to these principles on paper, but in actuality the limitations that you’re placing in terms of how we access this funding is actually preventing us from creating Decent Work.”

It’s a little bit more expensive to fire me than it might be for those folks who are precariously employed and yet are trying to push some of this work in their own organizations. So I feel like it’s a responsibility of mine. And I think many of my colleagues feel the same way in terms of our leadership team and our management team, we’ve got this responsibility to push the conversation. We’ve got a responsibility to dream in colour because we believe that it’s possible and it’s the right thing to do. We have to be bold and we have to push back against the reframe… Let’s dream together in colour about what’s possible and how we can change the things that really make us upset. 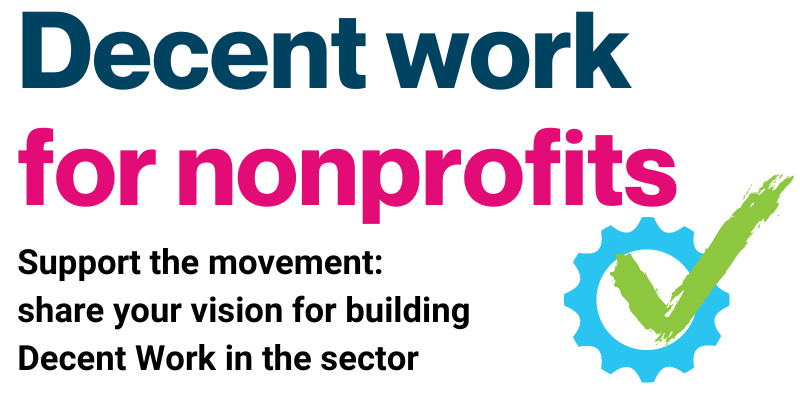