The world of democracies seems to be an uneasy and unpredictable one these days. Voters have chosen to support candidates and policies that threaten to upend the status quo, from the election of Donald Trump in the US to the support of Brexit by British voters, to the recent result of the Italian referendum.

People who have voted this way are not necessarily ideological radicals but feel that the economy and government economic policies are failing them. The following table of US data, taken from the New York Review of Books, shows, for example, how distorted gains from economic growth have been in the last few decades in the United States. No wonder people are uncertain and afraid. 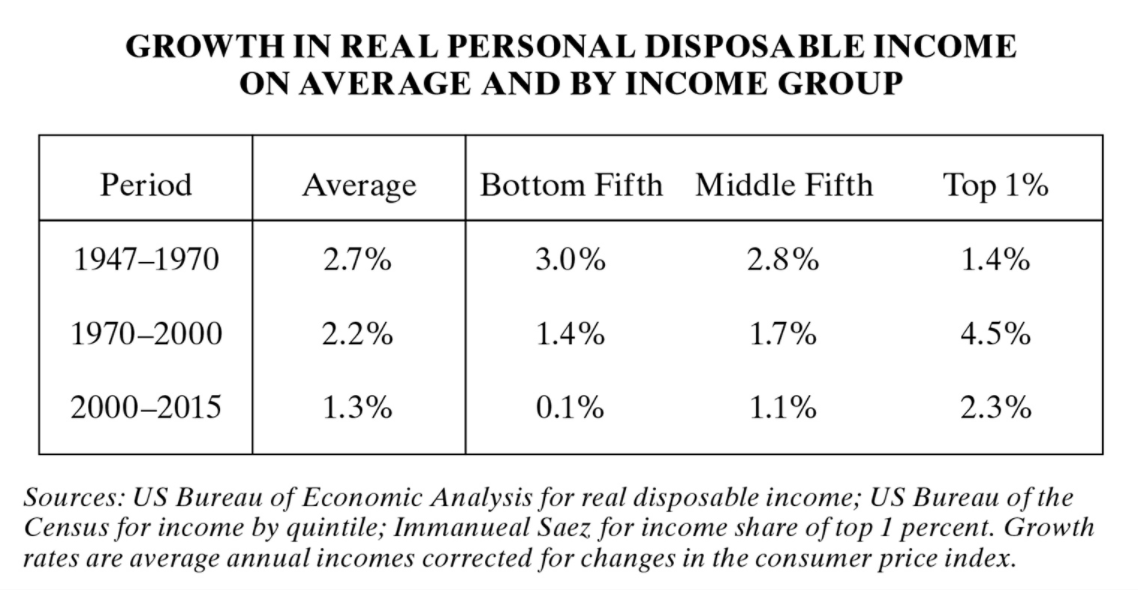 The US in not alone here. In a recent interview with the Toronto Star, Prime Minister Trudeau noted that Canadians and Americans face many of the same problems: “We have to understand that a lot of the frustration and anxiety [of Trump voters] comes from worry linked to economic activity…People are feeling unsuited…for the pace of change the planet is going through.”  He went on to describe the US administration and the Canadian government as united in concern but divergent in response to this set of concerns.

Charities and nonprofits can be unique and constructive parts of a Canadian response to these challenges. Our missions come from the failure of the free market on its own to provide for the homeless, the hungry, the sick, refugees and so on – as well as the inability of government programs to deal effectively with this range of issues. Even enlightened government policies will not deal with the stubborn problems of homelessness, addiction, poverty, illness and marginalization in general. We need charities and nonprofits that work and are sustainably funded to have a country we are happy to live in.

But charities and nonprofits also need to broaden their agendas, to heighten their relevance in the development of policies that benefit all Canadians. We need to focus on the quality and quantity of economic growth to advocate economic and social policies which correct the failures of the free market economy and of government to deal with those who have been and are being left out. The smart growth agenda developed in part by the Canadian Centre for Studies in Living Standards is a good place to start – envisioning growth that is equitable, inclusive and environmentally responsible benefits charities and nonprofits, benefits our disenfranchised constituency and benefits working people who feel left out. A smart growth agenda is one way of ensuring that concern for how the economy and government are working does not give way to growing unhappiness and reaction in the future.

At a time of division and upheaval, charities and nonprofits need to be a steadying and creative influence. We need to resolutely deliver good programs that are effective to the disenfranchised. But we also need to step up – to work at the “agenda” level to help and encourage government to develop policies that ensure that growth is equitable, inclusive and environmentally responsible. This is good for charities, good for those who are concerned about social issues and support our work and good for the economy in general.

Brian Emmett is Chief Economist, Imagine Canada. As the Chief Economist for Canada’s Charitable and Nonprofit Sector, Brian is tasked with measuring the impact of the sector and bringing economic issues facing charities and nonprofits to the forefront of public policy decision makers. Mr. Emmett is an economics graduate of the University of Western Ontario and the University of Essex in England, and has enjoyed a long and distinguished public service career. He was Canada’s first Commissioner of the Environment and Sustainable Development in the late 1990s and worked extensively on Canada’s Green Plan. He also served as Vice-President of the Canadian International Development Agency in the early 2000s and has been an Assistant Deputy Minister in a number of federal government departments. The position of the Chief Economist for Canada’s Charitable and Nonprofit Sector is made possible through funding received by Bank of Montreal, The Counselling Foundation of Canada, The Muttart Foundation, and an anonymous donor.